ABC-TV Show 'Chronicle' Features the 10th annual flying horse show at the pingree school in 2019
Link to Broadcast:
https://www.wcvb.com/article/craftsmanship-big-and-small/29418382
My piece-Sandy hook 2012-gets a quick visual! 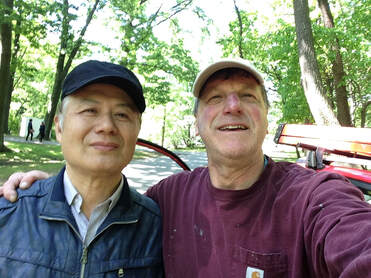 Allen and his new friend
LETTER TO THE EDITOR
Boston Globe  June 10, 2019
A Chance Encounter That Transcended US-Chinese Politics
The other day I began dismantling my sculpture displayed at the Studio Without Walls show in the Riverway Park, Brookline. As I started to loosen bolts, I noticed an older man standing nearby and staring at me. I said hello and we began to chat using his phone translator app. It turns out that he lives in China and is in Boston to visit his son, who is a student at Harvard Medical School. He asked me lots of questions about my pieces-'Monument to Lost Gloves'- and I asked him questions too (he's a landscape painter). He offered to help me load the heavy steel pieces into my car. I gladly accepted, and we got things loaded in short order. I thanked him, gave him a hug, and took a photo of the two of us.

​The recent warning by the Chinese government questioning the safety of its citizens in the United States left me very concerned. The trade tensions created by Trump's policies add to that suspicion and further divide us. We need more students, business people, scholars, families, artists and the like to visit the United States. And we need to reciprocate in kind. My brief encounter with this visitor from China affirmed the essential value of human connection: talking with each other, showing photos of our family (which I did), sharing a laugh, and having an old Chinese man lighten the load of an old American man.
LETTER TO THE EDITOR
Boston Globe  February 10, 2018
Family Violence Is An Epidemic In Our Society
I was struck by your juxtaposition in Saturday's Globe of the profile of Alexis Smith and the aftermath of her son's murder (Ameen Lacy) with the story about the resignation of a key White House staff, Rob Porter, after revelations came to light about his serial domestic violence in two previous marriages. It's no coincidence. Family violence is the most significant epidemic in this country. And it impacts EVERYONE regardless of their race, ethnicity, socioeconomics, or gender.

I know this firsthand because as a clinical social worker, I facilitated domestic abuse groups for men for 12 years and also managed treatment programs for women suffering from trauma and substance use issues. I heard many stories about the long-lasting impact of violence and abuse-in their families of origin, in the intimate relationships and in work settings. The vast majority of the women we treated used drugs and alcohol to cope with their histories of abuse. Also, most of the men in the domestic abuse program I ran had also experienced violence at the hands of their parents, siblings, coaches, and classmates. It was and continues to be ubiquitous and unrelenting. Acknowledging this 'fact of life' about family violence is critical to seeing it for the epidemic that it is.
LETTER TO THE EDITOR
​                                            Boston Globe  August 29, 2017​
THE TRAGEDY IN TEXAS AND WHAT WE CAN LEARN ABOUT OURSELVES FROM THIS EXPERIENCE

​The photos and stories in the Globe of the horrific and historic storm devastating Texas over the last few days made me fully aware that helping people in a crisis is color-blind. Black people helped white people to safety-and vice versa. Latinos saved lives in daring rescues. Women helped men. I suspect people of all races, ethnicities and sexual orientations gladly shared their water and food, willingly offered words of support and comfort and extended a helping hand over and over again. I suspect that undocumented residents saved the lives of desperate US citizens. I suspect that Democrats didn't ask party affiliation when rescuing stranded families from ravaging flood waters.

In each case, the distinction we customarily make between US and THEM ceased to exist. The good, noble people of Texas only saw the true humanity of their neighbors. Let's not forget this important life lesson when things return to some sense of normalcy.
​
​                                                               TITLE: Arriving Late (2018)
MATERIALS: Steel Plate and Steel Rod
This piece was donated to our local Jamaica Plain Arts Council (who supports and organizes
our annual Open Studios weekend) to be sold at the JPAC's annual fundraising event. 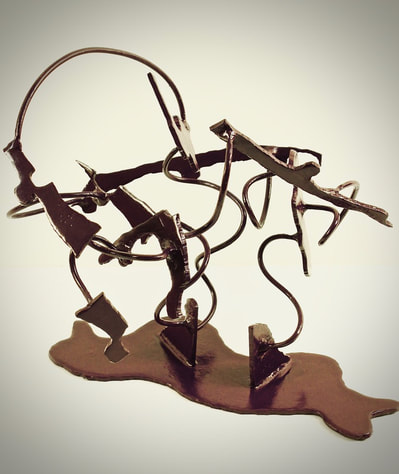 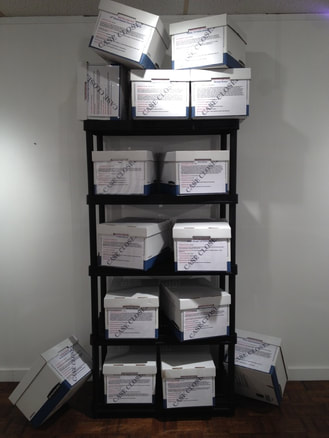 This sculpture was selected to be part of a show entitled STATE OF THE UNION​
at the Winfisky Gallery at Salem State University. The show ran from
November 9-December 14, 2016. ​With the ​impending ​election of a new
president, the curator, Professor Ken Reyer, wanted to consider the concerns and hopes for our future.The proposal fo ratios show and the selection of th artwork happened well BEFORE the outcome of the election was known. Themes as diverse as the environment, social and income inequities, and education were covered in the show. STATE OF THE UNION received a lot of media coverage because several student groups strongly objected to the subject matter of some artwork and as a result,the show closed down for three days. The school's administration made some reasonable accommodations and the show was reopened.
​
© 2016  All photos and art pieces created by Allen M. Spivack  All rights reserved.